Preface: Basis for Need for Briefing

Since 2017, the New York Times has published significant developing news as well as background historical feature articles related to the long standing mystery of “UFOs”.

Included as a subject in the New York Times background articles was an in depth examination of the dynamics set in motion in early 1953 that would over subsequent years largely succeed in cultivating an atmosphere of ridicule and denial around this subject.  On August 8 2018, in an article by Laura M. Holson, the NYT delved deeply into the work and findings of the CIA-commissioned science advisory panel known as the “Robertson Panel” (formed after the dramatic UFO events over Washington DC in June 1952):

On December 16, 2017 the New York Times published a major report that revealed a small Pentagon program initiated by supplemental funding to the DOD budget that Harry Reid, Ted Stevens and Daniel Inoyue felt necessary in light of hearing from many members of the military about their reports of unusual incidents involving UFOs going unaddressed by the government (or by those managing our armed services).

This story was concurrently reported by Politico at that time and on April 23 2019 their reporter Bryan Bender broke the story about some positive steps just taken then by the US Navy in response to this issue of ignoring or leaving unaddressed dramatic and puzzling ufo events experienced by members of the military in recent years:

~ his 2 years of restrictions on lobbying have passed and…

~ he is working now to encourage open congressional hearings and establishment of a public and official program that studies the ufo events continuing to be unexplained.

~ he is aware of other (not identified) programs with more information and evidence re: ufos than is known publically and by almost everyone in government.

A little while later in 2019, Harry Reid chatted with Las Vegas videographer Joe Murgia and he suggested that the public ask candidates questions about this issue.

Read Joe’s transcript of his chat with Reid here:

My Interview With Senator Harry Reid: “People Are Afraid To Step Out For Fear Of People Criticizing Them For Talking About Extraterrestrial Things”

So, head’s up to those addressees of this briefing who are running for President (and Congress)!!!

The original New York Times story that for a couple of weeks sparked intense news media coverage, made very exciting by the showing of US Navy pilot film from 2 different incidents of “unidentified aerial phenomena” exhibiting advanced and unusual capacities, can be read here:

An official report on one of those incidents was arranged to be released through Las Vegas reporter George Knapp and was posted on the To the Stars Acsdemy of Arts and Sciences site.  Here is the executive summary and 6 key assesments (which are either eye opening or jaw dropping:

Here is the link to that page:

In January 2019 the Federation of American Scientists received a full list from the Department of Defense of the 38 scientific studies done for the Advanced Aerospace Threat Identification Program (also released then to Nick Pope, former Ministry of Defense official in Great Britain): 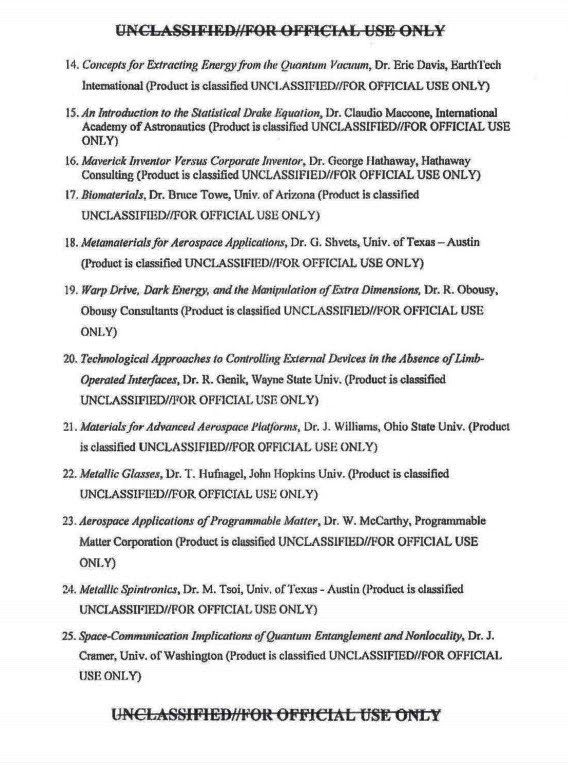 The New York Times in its series of background articles addressed the subject of one of the key papers that entails describing local warp drive, the means envisioned for bypassing the speed of light barrier to plausible interstellar travel:

It is difficult for newcomers to wade into a study of this subject with so much irrelevant distracting noise and misdirecting falsities conveyed by many folks in the so called “ufo community”.

Fortunately there is a resource that serves as a starting point for studies that surveys in depth “the phenomenon from the beginning”.  That phrase in quotes is the subtitle for the recently updated (3rd edition) The UFO Encyclopedia by Jerome Clark.

Leslie Kean, one of the three authors (along with Helene Cooper and Ralph Blumenthal) of the December 16 2017 NY Times article, recently directed everyone’s attention to this massive work as a key tool to study this subject.

Public Action: The Call for #UFO2020 Activism and Starting the Public Conversation

Bryce Zabel, a former reporter and long time Hollywood-based writer, director and producer, has initiated a campaign to ask Presidential candidates a question on this subject, framed by the current emerging news described above.

To follow this, and join in the organizing of it, you can see what is up with this by checking #UFO2020 on twitter.

Here is an idea I had for an initial question:

“[title/name], Harry Reid has reported that he is lobbying now for hearings on ufos to address increased reports from military personnel. Our 2016 nominee had great awareness of and interest in this issue. Can you describe your level of interest and awareness?”

Go to a candidate’s town hall and ask: “The

has reported on a govt. program to investigate #UFOs,

has called for investigations, and the

says it’s writing new #UFO guidelines. If elected, how will you advance transparency on the issue?”